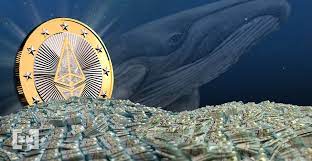 Crypto whales are always on the lookout for the chance to cast their investment nets on the readily available coins up for grabs to consolidate their holdings in the industry. WhaleStats, a crypto data, and analysis firm, has released data showing an unknown ETH whale acquiring a whopping eight million DOGE.

The move by the anonymous Ethereum whale is an indication of the reality that the meme cryptocurrency is more than just a joke; it is making some impression on the minds of other coin holders. Furthermore, this points to another positive direction for the future of Dogecoin.

It may appear that ETH whales are beginning to target the meme cryptocurrency as the next destination to force them to maintain their grips on any performing digital coin. Considering how it played out with Bitcoin and Cardano, where whales mostly controlled large amounts of cash and the circulation of the tokens.

For the time being, electric car maker Tesla, supported by its owner, Elon Musk, has begun selling some products for the earliest meme coin. The car company has forwarded two types of merchandise for the first batch of transactions. Despite the company’s limited products, it has generated excitement from various quarters and among its large community of token holders.

Dogecoin Rises To 16.48% After Tesla Begins Using It As Payment.

When Tesla launched a variety of its merch to be paid using Dogecoin, the value of the famous meme coin shot upward by 16% and was trading at the market price of $0.1985 as at the time of writing; indicating an increased valuation. The event has coincided with the increased demand for the Canine coin. Users looking to purchase more tokens and new customers are already demanding to buy some percentage of the cryptocurrency.

As Tesla began marketing some of its DOGE-priced items, its product’s decision-maker, Taylor Robinson, posted images of two things on his Twitter handle with the caption, “Cyberwhistle.” The now out-of-stock collectible is valued at 300 DOGE, while the other merchandise has a price tag of 835 DOGE.

However, in the early hours of today, the co-founder of Dogecoin, Billy Markus, encouraged the coin holders to use their tokens to make purchases on the Tesla merchandise platform. Markus made this statement under Musk’s remark on Twitter about Tesla’s plan to sell its products in exchange for DOGE.

Multiple sources have reported that about 39 million worth of Dogecoin was transferred to unspecified wallets in the past couple of days. Each transaction contains meme coins in the range of 4, 5, or 8 million per successful transaction. No record of such huge trading of the cryptocurrency has ever been recorded in the industry’s history.

The report indicates the ongoing rush for the meme token, surpassing what industry insiders had predicted and surprising most people. Nonetheless, any remark by the Tesla CEO about the meme coin is bound to attract massive reactions such as this.