Bill Gates Takes A Dig At Elon Musk Over Cryptocurrency 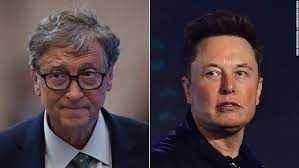 Although digital currencies have come a long way over the years, and it has cemented their place in the mainstream, some people are more or less impressed with them, and one of the recent critics is Bill Gates.

The CEO of Microsoft Corporations recently raised the alarm about crypto investments by saying that cryptocurrency is akin to a smoke bomb fueled by entrepreneurs whose motivation is not dependent on the profits coming from crypto.

One of such entrepreneurs who discuss crypto a lot is Elon Musk. The Tesla CEO is one of the most ardent supporters of the digital meme token, Dogecoin, and the crypto industry in general. Musk is known to drive speculation in price whenever he posts on anything that has to do with a transaction involving cryptocurrency.

In a recent interview with Bloomberg, the tech tycoon talked about Elon Musk, Tesla, and why Musk is passionate about cryptocurrency.

According to Gates, Musk’s love for Dogecoin and cryptocurrency, in general, is because he has the cash to spare and does not bother losing it to investments in the industry. Gates believed that Musk was a compulsive investor who had no idea what to do with his money.

The billionaire added that people with half the money Musk has should be careful about investing in digital currency due to its volatility because most investments usually lead to loss, so people should be cautious.

Both Musk and Gates are some of the wealthiest men in the world, with portfolios running into billions of dollars between them.

The criticisms coming from Gates result from the numerous tweets Musk did relating to crypto investments. In Q3 of last year, Musk was reported to have said that he is attracted to cryptos, and he also revealed that he has investment portfolios in Dogecoin, Bitcoin, and even Ethereum.

Musk has already given the go-ahead to his electric car company, Tesla, to start accepting DOGE for payment for some of its merchandise to show his commitment to his most preferred digital token.

Musk has previously requested McDonald’s via his Twitter handle to allow Dogecoin to be used as payment for its fast food, but the fast-food chain did not accept Musk’s request.

The influence of the Tesla boss on the performance of the first meme cryptocurrency is widely acknowledged by the industry. For example, a single tweet from Musk can push the price of the DOGE up depending on the content of the message.

Similarly, when Tesla was planning to start accepting payment in Bitcoin, the statement from Musk about the deal made the price of the first cryptocurrency surge only to decline after the announcement that Tesla would not accept Bitcoin as payment.

As it is, Musk has not responded to Gates’s remarks about him during the Bloomberg interview as he is expected to reply because he is known to pay back words for words.