Robinhood Holds About 31.9% Of DOGE Supply In Circulation 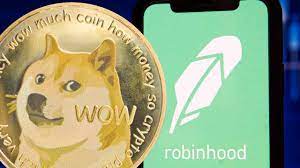 Crypto investors have more than one platform to store their assets safely and are among the most popular wallets in the crypto industry.

The Robinhood wallet has become one of the leading digital currency wallets that investors use to safeguard their funds. Not only is it widely used by investors and traders alike, but it is also a dependable platform that adopts most of the performing cryptos on its trading floor. And Dogecoin is one of the coins that a significant number of investors have stored on the Robinhood platform.

Robinhood currently holds over a third of the total DOGE in circulation; the meme tokens are held on behalf of investors.

According to Dogecoin Whale Alert, the popular crypto brokerage platform holds about $1.5 billion worth of Dogecoin. Robinhood stores a massive number of tokens in two separate wallets using eight different addresses, approximately 31.90% of the total Dogecoin supply in circulation.

It is worth noting that Robinhood holds the popular meme coin on behalf of its numerous customers who use its services to store their assets.

At the beginning of the month, U.Today reported that the Tesla CEO, Elon Musk, had commented on the never-ending talks of Dogecoin payment and fast-food giant McDonald’s.

Musk hinted in his recent tweet that he believes the Doge Army has been resilient in their struggles to get the fast-food behemoth to start accepting the first meme digital currency as payment. The billionaire also noted that it is high time for the DOGE to become a regular payment option in the mainstream.

Initiating the talk about Dogecoin and McDonald’s, Musk tweeted by urging the fast-food chain to consider using DOGE as payment for its services. In return, he would sit on live TV and eat a Happy Meal from McDonald’s.

However, Musk’s request was declined by the fast-food chain, which wants Tesla to accept Grimacecoin as payment for its merchandise.

Despite McDonald’s’ refusal to entertain Musk’s request, other fast-food chains have already shown interest in giving the meme token a chance.

In another recent development, Musk has hinted that both of his companies, Starlink and SpaceX, would begin accepting Dogecoin as payment when all things are set in the future.

Billy Markus, the co-founder of Dogecoin, recently announced the opening of a DOGE-themed restaurant in Dubai where customers can pay for burgers with DOGE.

The Doge community, through its co-founder, donates to Ukraine to help cushion the effects of the humanitarian crisis in the war-torn country. According to Billy Markus, the co-founder of Dogecoin, the Doge community is not wealthy, but it has always contributed to different causes in times of distress.

Markus also pointed out that the DOGE is not as big as others want to believe because it is mainly used in smaller transactions in many places and has the potential to surpass its current position. The Doge community sent $54,000 worth of DOGE to Ukraine.

Dogecoin Community Donates To Ukraine As Airdrops Plan Underway
Dogecoin Price Review: The DOGE/USD Pair Is Expected To Dip In The Coming 24 Hours