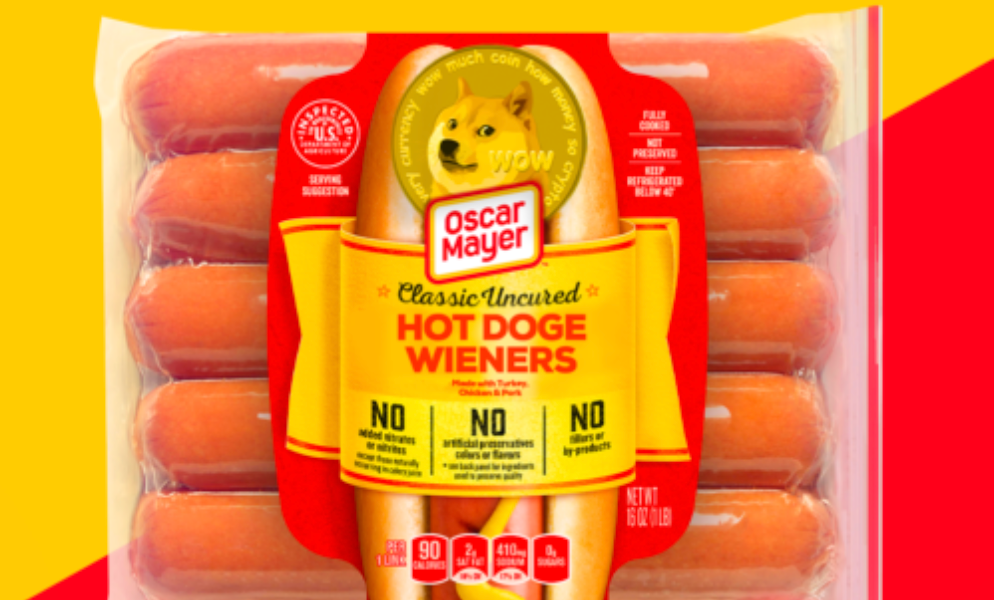 In a streak of  recent Dogecoin promotions, the crypto community is greeted with an auction from a food giant Oscar Mayer. The auction would see the sale of ‘hot Doge Wieners’ braced with over 10,000 Dogecoins to the favored bidder.

Oscar Mayer is leveraging the current Dogecoin hype by initiating the sale of the peculiar package. The firm announced on their Twitter wall that the auctioning of the limited-edition Hot Doge Wieners would be executed on eBay. The package is comprised of 10 sausages and a graphic representation of the Shiba Inu dog breed that is associated with Dogecoin.

According to reports, bidding for the package did take on a high turn instantly. The American food unit slated the sale to commence on Wednesday with a schedule to end it on Saturday. However, they abruptly halted the auction after it gained unprecedented attention. The sudden pause was soon removed and the bidding took pace again.

The return of the auction saw the Dogecoin reward doubling up to 20,000. The reason could be linked to the reaction of bidders when the auction initially hit eBay listing. Some Redditors claimed that they observed initial bidding that spiked at about $3,050. Others also attested to have spotted bids from $2,400. Bids have surmounted ever since, crossing over 50 bids on Thursday.

The estimate of the Dogecoin reward is roughly $4,000. The actual flare would be the opportunity of owning some of the perishable hot doges. The item is reported to have a shelf life of approximately three months. A consideration of about four weeks for delivery is also necessary.

The motive behind the Oscar Mayer auction is an attempt to alleviate hunger in the United States. Proceeds from the auction would be allocated to the hunger relief organizations like Feeding America. This move is in unison with the global response towards starvation. Oscar Meyers introduces its participation in the Dogecoin promotion via this channel as well.

The cryptocurrency DOGE has gained massive support and adoption in recent times. Holding an enviable position in the top 10 cryptocurrencies list, the digital asset is gradually evolving from being a simple meme token to a financial sensation. The development of the coin has taken a steeper approach as Ethereum initiates a bridge for DOGE to participate in its ecosystem. This move would enable DOGE to become more useful and scalable, thereby increasing the rate of its adoption.

They appear to be a growing trend amongst brands that seek to promote Dogecoin. Recently a unit of Conagra Brands “Slim Jim” took on a Dogecoin marketing approach for its brand. As a result, the smoked meat vendor recorded an upsurge in customer interactions and proceeds.

The frenzy goes even further as brands such as Snickers, Axe, and Milky Way take part in tactical Dogecoin promotions. Some of them are rebranding their products to mirror the meme token. Gradually, the beloved Shiba Inu symbol is becoming a household logo despite having an array of rivals.