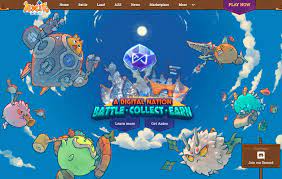 The world of the play-to-earn blockchain-powered game continues to draw the attention of avid gamers and crypto enthusiasts who relish the fun of playing the game.

Axie Infinity‘s much-talked-about blockchain game, Origin, is set to hit the market in no time at all as developers are working round the clock to leave no stone unturned in their quest to make the game a hit.

The new game will see players breed and collect their mini-monsters called “Axies” in combat. Other adventurous modes also give players the chance to earn Smooth Love Tokens (SLP), which they can redeem for more Axies, giving them the edge over their competitors.

A Look Into The Origin Game

The developers of Axie Infinity: Origin have designed the game to be community-centric, where multiple players converge to collaborate, discuss, create additional information, and make informed decisions together. The game is not just for the individual alone but for the collective, much like how the cryptocurrency industry operates.

The players’ choices define their choices and experience, which enables their Axies to build to reach the game’s peak. In addition, the SLP of the game is the tokens players earn. The game reward has been modified to be a utility for players to use, not just in the game alone. Alternatively, players can build up their empires using their tokens or transfer them to their cryptocurrency wallets for withdrawal. The variety of options in the new game is limitless.

In their quest to win, users battle other players using their Axies to conquer and dominate other Axies, where the margin of victory is high depending on the Axis users’ breed. Users can choose between the quest mode and the adventure mode, which is to try and dominate by contesting with others through trading Axis, breeding Axies, and taking part in other combat battles.

New Features Of The Origin Game

The Axie Infinity development team has been working on creating a welcoming and all-inclusive platform with features like harassment reporting, chat moderation, self-reporting, and language filter, among others.

The Axie Infinity team believes that the new game will become the best among the Axie collections because it has what it takes to rival previous editions and even its competitors in the blockchain gaming industry.

Not surprisingly, Axie Infinity has recorded a surge in users’ subscription to its SLP due to massive updates it carried out for improving the game’s overall system, from gameplay to game mechanics and the reward system.

The game has promising prospects in the market at present. Interesting players looking at staking their place in the latest play-to-earn game are on the rise, making it the most in-demand blockchain game at the moment.

The consistency of the player’s correlation between engagement and contest frequency points to the Axie Infinity team’s work in the background.