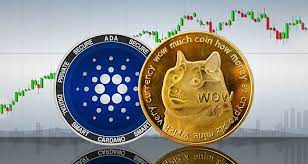 ADA is currently taking the lead in the adoption of cryptocurrencies in Australia. According to a recent survey by CoinMarketCap, a leading source in the crypto industry, ADA has become the most preferred cryptocurrency in Australia. According to the report, Dogecoin is the most preferred digital token in America. Both tokens have performed well on the market and are expected to go higher in the future.

The survey was carried out by CoinMarketCap to determine the level of crypto adoption in 22 countries. In the end, the results revealed that Nigeria has the highest cryptocurrency adoption rate. The report states that 24.2% of the Nigerian respondents prefer cryptocurrencies to fiat as a hedge against inflation. This is an impressive figure that shows how digital tokens are impacting the lives of many.

Following in second place is Malaysia with 18%, and Australia coming third and 17%. The survey also indicated that 11.4% of all respondents agreed to own crypto assets. The report was shared by Connor Sephton of CoinMarketCap. Five other Asian countries, Indonesia, Hong Kong, Singapore, India, and the Philippines, also had a significant figure, while Mexico and the U.S. made the list of the top ten countries.

It is worthy of mention that ADA, Ether, BNB, and Doge are leading the globally preferred digital token race. Bitcoin, the world’s first token, was not mentioned as being the preferred token of any of the countries on the top ten list.

The world is witnessing an unprecedented increase in the adoption of cryptocurrencies. El Salvador made the news in September when it announced a full adoption of Bitcoin as a legal tender. Since then, there has been an increase in calls for countries to adopt policies that are crypto-friendly. But the people are not waiting for a government directive before they own some cryptocurrency assets.

Cardano (ADA) is widely regarded as one of the most successful cryptocurrencies to date. It currently sits at 4th position on CoinMarketCap and trades at $2.16, having lost 0.50%. Considering ADA’s features and rapidly expanding network is no surprise that Australians are more interested in it than the other tokens.

Yet, it is revealing to see that each country seems to have its preferred token. ADA uses a proof-of-stake protocol, in contrast with Dogecoin that uses a proof-of-work protocol. Dogecoin is the preferred token of Americans, according to CoinMarketCap’s survey. Indonesians, according to the report, have a preference for BNB, while investors from Singapore prefer Ether.

As global adoption of digital tokens increases the market capitalization and intrinsic value of their native networks will also increase. More countries are seeking to strengthen their position on cryptocurrencies to be at an advantage when it matters the most. Where countries such as China believe that an outright ban of cryptocurrencies is the best, others have sought to understand it and work with the industry to create policies that will establish stability and security.

Elon Musk: We Might See the First Trillionaire Soon
JP Morgan Warns of a Potential Bearish Market for Dogecoin and Robinhood