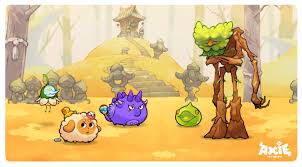 Online blockchain gaming is now the go-to favorite for most play-to-earn game enthusiasts looking to leverage the rewards from the game to earn digital coin tokens as much as they can.

Axie Infinity dominated the headlines this week after it managed to set a record by surpassing $4 billion, its highest of all time in sales of NFT tokens on its platform. After its launch in 2018, the game is currently among the top five as it occupies third place on the NFT platform in terms of a record number of sales.

Sky Mavis, the creator of Axie Infinity, has been working on the direction the company wants the blockchain game to move in and the development team’s expectations regarding marketability and acceptance from the NFT community.

The subsequent move by Mavis to redo most of the game’s overall system by updating and making changes to the crucial parts of it, like gameplay, game mechanics, player adaptation, and most importantly, the game reward, where most of the changes are made.

Despite reducing the game rewards to a level that most consider too low, Axie Infinity has continued to grow and enjoy massive support from its community, with the Smooth Love Token (SLP) seeing an upward trend in sales as expected.

$4 Billion And Above Surpassed In NFT Record Sales

Last year has seen the Ethereum-based play-to-earn game become more popular than previously, as lovers of blockchain-themed games soar and demand for the game increases. On the other hand, its digital currency, AXS, also enjoyed a significant rise by increasing to a shocking 2,544% against the USD in the same year.

However, its Smooth Love Potion (SLP) was not among Axie Infinity’s products to have experienced relative growth, as it fell by 70% in value from last year to date despite having recorded modest growth. However, a significant loss is part of the market dynamics in the crypto industry.

According to the data released by Dappradar, there are 53,502 AXS token owners presently, and out of a total of 166,870 Axies, there are active 45,276 Axie holders at present.

The week’s NFT data recently released indicates that the Axie Infinity game has a total sales of over $4 billion in NFT transactions, making it the all-time high. Today, Axie Infinity’s average price is $198.77, with about 1,905,222 active traders in its market database.

The record $4 billion in NFT sales made Axie Infinity the third-largest NFT platform to record such high sales. However, OpenSea and Looksrare’s sales records are way above Axie Infinity’s, with $21,85 and $16.85 billion, respectively.

Despite achieving a sales milestone, the Axie NFT crashed down by 40.58% in the last couple of days, with the weekly data showing that traders carried out transactions of $19,815,670 on the Axie platform, and the past week showed about 91,940 buyers spread across the 267,906 trades that took place in the Axie transaction marketplace.