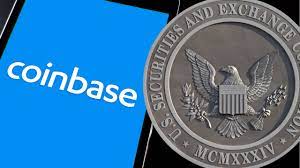 The SEC sent a warning notice to Coinbase Global Inc. Regarding the sale of product offerings where users can earn commissions from their digital asset holdings.

Coinbase Has No Clear Understanding Of The SEC’s Stance

The exchange acknowledged receiving a notice from the financial regulator that it might face a lawsuit if it launches its new product offering. Hence, Coinbase has revealed that it would delay its Lend lunch for two months to iron out any problem with the commission. The exchange’s Paul Grewal commented saying, “we are yet to fully understand why the SEC would want to sue us over our product launch.

They only informed us that they were categorizing our Lend offering as a Security without explaining how they arrived at that conclusion.” SEC said it uses lawsuits Howey, 1946 and Reves, 1990 as its basis for assessing the Lend launch. Grewal claimed that it would be useful if SEC could explain the application of these cases to its Lend product offering.

He further said, “even though the SEC is allowing us to defend Lend in writing, if we don’t understand the basis of judgment, it would be hard for us to put up a proper defense.” Coinbase CEO seemingly agreed with the company’s legal adviser post based on his post on Twitter.

However, the SEC is yet to release any official statement regarding Coinbase’s claims or respond to media inquiries regarding these claims. As widely reported, several state financial regulators are issuing warning notices to exchanges offering similar interest profits. Before Coinbase, the most recent exchange to receive such warning notice was BlockFi Lending.

Gary Gensler has continued to reiterate the need for the SEC to be given more oversight functions over the digital asset space. He even argued that the legislature should approve a policy for regulators to develop new rules as they deem fit to protect investors’ interest at crypto exchanges. Grewal also claimed that part of the SEC notice involved Coinbase’s disclosure of the detailed personal information of the Lend waitlist customers.

“As a firm who doesn’t take his customer’s contact details for granted, we are yet to accede to SEC’s request. We are yet to be convinced on why the SEC would need such details and how it is relevant to the issue at hand. We might have even considered it provided the SEC is open to giving us some clarifications which we requested.”

According to Grewal, the exchange has been in dialogue with SEC since April this year. Our goal was to understand their stance on our Lend offering with which we want to empower our customers financially. However, all the discussions have remained deadlocked with no headway.

The news of SEC’s lawsuit threat against Coinbase affected its stock price on NASDAQ. Coin stock lost 3.7% in this morning’s pre-market trade. This was in addition to the bearish trend surrounding all cryptocurrencies following yesterday’s flash crash. Bitcoin led the fall, losing almost $6K, while some altcoins recorded up to double-figure percentage losses.